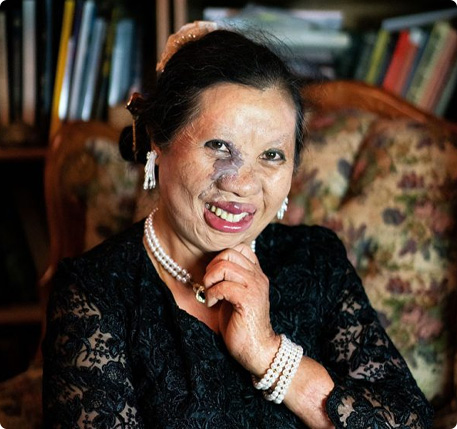 Hmong Artisans was founded by Dr. Dia Cha, the first Hmong woman to receive a PhD in Anthropology in the United States. Since 2005, she has visited many remote Hmong villages in the highlands of China and Southeast Asia for research.

During those trips, groups of twenty or more Hmong women would surround Dia with their beautiful artwork, begging for her to buy from each of them so they could support their families. It was heartbreaking that Dia could not purchase needlework from everyone, so she started Hmong Artisans.

Hmong Artisans is a place for these remote artisans, and those inspired by them, to sell their one-of-a-kind, handcrafted works to shoppers around the world.

Purchasing top-quality needlework, art, or crafts from Hmong Artisans has a direct impact on someone’s life. As a shopper here, you’re supporting rural artists who sustain ancient traditions, not lining the pockets of a billionaire corporation.

On behalf of Hmong artisans from all over the world, thank you for your support.

Dia grew up in Laos in the 1970s during the Secret War in Laos during the Vietnam War, where her father was killed in action. Her family, along with thousands of other Hmong people, escaped the war by seeking temporary asylum in Thailand.

Because Dia’s family had lost everything, her single mother spent long days crafting intricate Hmong needlework to earn money to buy school supplies, clothes, and medicine. After starting their lives over again in the United States as refugees, her mother continued to make and sell Hmong needlework sent from refugee camps at craft fairs to support their family and their relatives in the refugee camps in Thailand. Go to Queen of Needlework to read more about Dia Cha.

Hmong needlework, jewelry, tools, and musical instruments are ancient art forms that have been passed down from one generation to the next without any written records. These forms of art were made exclusively for Hmong until around the 1970’s.

The Hmong/Miao people are a transnational ethnic group, with a history of 5,000 years in China. Due to political and economic hardships in the 17th to 19th centuries, groups of Hmong migrated from China to Southeast Asia, where they settled in the desolate highlands to start a new life.

Hmong lived in peace until World War II when the Japanese and French colonial governments came to Southeast Asia. Hmong were recruited by both the communist and democratic governments during the Vietnam War. When the Vietnam War ended in 1975, thousands of Hmong became refugees.

Today, Hmong/Miao populations can be found in many countries all over the world, including China, Laos, Cambodia, Burma, Thailand, Vietnam, United States of America, Canada, French Guiana, Argentina, France, Germany, England, the Netherlands, and Australia.